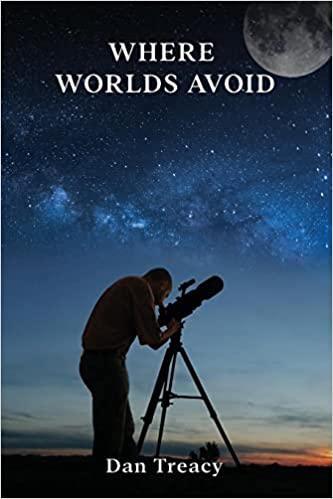 Recent release self-publish book “Where Worlds Avoid” is a story based on a well-trodden path of aliens coming to our planet to save or destroy everything we hold dear, but on this occasion, the planet of Bellsurp has sent a low-quality team on point duty with one task; to determine whether or not humans can be controlled.

January 11, 2023 – The commander of the task force is Captain Damalgo Swamsoot, who agrees to the assignment to impress Ethel, one of the much-vaunted clever people, although on this occasion, the clever people are outwitted by the military and inadvertently agree to the mission to either save or destroy the planet Earth.

Their craft lands on and isolated island of Scroat, sited off the North coast of Scotland and the crew unconsciously deem Tam Wilson to be the most important, therefore most powerful, beast on the planet and Swamsoot sets about getting Tam to agree to basic demands, therefore proving the servitude of humans. Such an achievement would allow him to send an immediate message back to Bellsurp declaring Earthlings to be affable and no threat to the known universe.

As Bellsurp is a crooked, confused planet run, in the main, by cowards, the notion of a military intervention is brand new and their inability to carry out the most basic attacks or plan thereof proves to be difficult. Battleprop sees this as an opportunity.

Back on Bellsurp, Ethel tries to ensure no attack is launched while Swamsoot and his team are there, but ultimately her task becomes impossible to maintain.

Dan Treacy is a solicitous man and a political animal who uses his time to educate others around him about the ways of the known and unknown world. If he was made king for a day, he would take the day off and go for a walk. He also likes chocolate biscuits, milk and dogs. His dream of equality and peace remains in place after a tumultuous period in the life of our small, almost unnoticeable planet and while he has written a billion words to try and relay his emotions on the subject of world peace, he has only spoken about forty words since 1999.

Readers who wish to experience this deeply absorbing work can purchase “Where Worlds Avoid” by author Dan Treacy at bookstores everywhere or online at Amazon or Barnes & Noble.