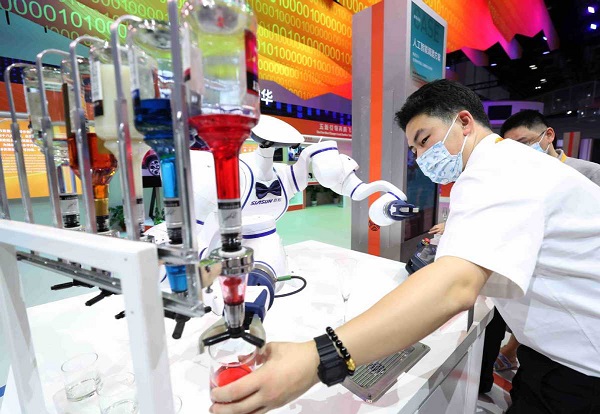 An employee readies a bartending robot at the 2022 CIFTIS exhibition venue in Beijing. [Photo by ZOU HONG/CHINA DAILY]

On Tuesday, China rolled out the masterplans respectively for six cities newly designated as comprehensive pilot areas for expanding the opening-up of the services industry.

The move is widely seen as part of the country’s broader push for expanding high-standard opening-up.

According to the masterplans, the six cities; which include Shenyang in Liaoning province and Nanjing in Jiangsu province; will broaden market access, reform regulations and improve market environment in the services industry, to increase market openness, improve regulatory environment and enhance business climate.

The other four cities are Hangzhou in Zhejiang province, Wuhan in Hubei province, Guangzhou in Guangdong province and Chengdu in Sichuan province.

The pilot cities are expected to accumulate experiences that can be replicated throughout the whole country, the plans said.

The country announced on December 20 that the six cities were selected to be comprehensive pilot places for expanding the opening-up of the services industry.

Before that, the pilot places serving the purpose were Beijing, Tianjin, Shanghai, Chongqing and Hainan province.

WebForce, a CRM and Outbound Call Center company, is helping online businesses scale in record time with its strategic approach.

Mauro Rosero: The Colombian Musician Who Shines with His Artistic Talent

Hobbiecode: A benchmark in algorithmic trading that operates with the security of audited accounts

DECONTAMINA, The Ultimate Technology to Eliminate Airborne Contaminants with AI | The Future Is Now…