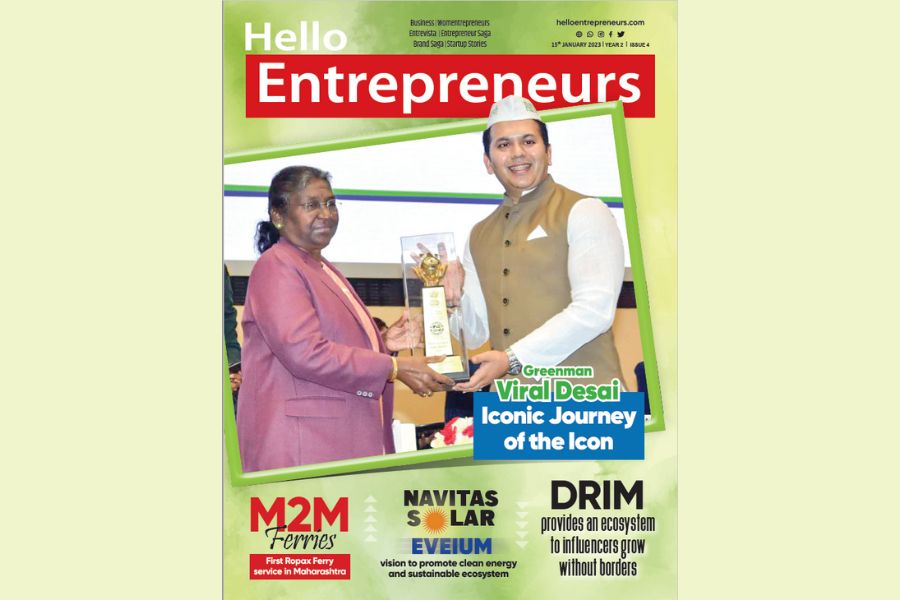 Surat (Gujarat) [India], January 18: Adding another glorious feather to his already shining cap, Surat-based entrepreneur and environmentalist Viral Desai, who has earned the moniker of Greenman for his love for the environment and scores of environmental initiatives, has been awarded the National Energy Conservation Award first prize in the textile sector.

The achievement is also a matter of great pride for Hello Entrepreneurs magazine as Viral Desai is a columnist with the leading digital magazine highlighting stories of successful entrepreneurs and businesspersons.

The National Energy Conservation Award, given by the Ministry of Power, was presented to Viral Desai by the Hon’ble President of India Droupadi Murmu, at an event in New Delhi recently. Incidentally, this is Viral Desai’s sixth national award, of which he has received three from three different presidents of India.

In her address, the Hon’ble President said that it is a top priority for all of us to ensure that future generations breathe in a pollution-free environment and live healthy lives. She said that while facing the challenges of climate change and global warming, energy conservation is a global as well as national priority.

The National Energy Conservation Awards are given to individuals and organisations working for energy conservation in various sectors. Viral Desai’s company Zenitex got the first place award in the textile sector in the entire country.

“I am pleased that Zenitex has got the first position in the textile industry across India and received the prestigious national award for energy conservation. It is an apt recognition of our commitment to the environment and the several measures we have implemented to conserve energy at our textile factory,” said Viral Desai.

“Gujarat was the first state to take giant strides towards renewable energy and energy conservation under the leadership of Prime Minister Narendra Modi, and it is fitting that a company from the state has received the award for energy conservation. I am confident that India is going to be a role model for the whole world in terms of energy conservation and climate action in the coming years. It is a matter of great pride that we are getting an opportunity to contribute to the great cause in the Amrit Kaal of the country,” he added.

It is noteworthy that Viral Desai has already received four awards for his commendable work in the field of environment and energy conservation, in which he has been the first in the country thrice. He has been recognised regionally, nationally, and internationally because of his environmental initiatives. His “Satyagraha Against Pollution and Climate Change” campaign has received tremendous response at the national level. His Tedx lecture in PDEU Gandhinagar, the ‘Diary of a Greenman’, has also been widely appreciated by the youth and is a source of environmental inspiration to many.